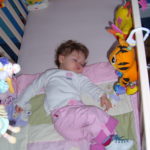 Ruby arrived late and needing inducing. The pregnancy and birth were uneventful. It wasn’t until the 6 month milestone we noticed she wasn’t holding objects and she was making odd movements. We spoke to the Health visitor who advised us see the GP. The GP was unsure what the movements were but referred Ruby to the local hospital to see the paediatrician. Two weeks late we met her. She witnessed Ruby’s abnormal movements and recognised  infantile spasms, a type of seizure. That afternoon we were admitted to Pendlebury hospital and started 4 months of tests and investigations. Our hearts broke that day.

The day we had our ‘diagnosis’ appointment for Ruby was the scariest day of our lives. We had agonised over genetic testing and the answers it would bring. Would it be my fault. Would it be her dads fault.  We left St. Mary’s hospital with our 12 month old daughter, clutching a piece of paper with the details of an American website that had information about her condition, and a hand drawn diagram of Ruby’s abnormal chromosomes. We didn’t speak, we were numb. She looked so perfect on the outside but we now knew mother nature had been cruel and made her chromosones abnormally complex. The relief was huge that it was not our fault. Proved in the results of the tests, but we felt the burden of guilt. We were  her parents. We created her. Ruby’s future now would feature epilepsy, severe developmental delay and uncertainty.

For the next few months we searched the internet for information, the answer, the magic drug. Anything that would offer us a glimmer of hope that our little girl would be ok.

We made contact with other families in the UK with Ruby’s condition, IDIC15. We travelled to meet them and spent the day telling our story, listening to others and watching the children. There was a huge range of abilities within the group. One cap certainly did not fit all.  It didn’t give us the answer we had hoped for. It filled us fear and even more uncertainty. We feared for the future and how would we cope with everything that we would face.

We were not prepared for the uncertainty ahead. IDIC 15 was rare so there was no plan. You expect guidance from the professionals and referrals to specialists who can help with walking, talking and ultimately the offer of hope. But the professionals were uncertain as were we. They didn’t know how to manage Ruby’s condition. They reacted to her condition, mainly her epilepsy. There wasn’t a person to manage Ruby as an entire person, only experts in parts of her. We were lost. Our IDIC 15 community told us early intervention was key, but we were in a part of the country where Portage was not available to us. So we were told we had to wait for Ruby to be seen at the Child Development Centre at three.

As a mother I stopped working to care for Ruby. I spent hours alone at home with her. Trying to engage her in toys, noises and even me. There was nothing, no response back at me , her mummy. I didn’t even know if she knew that I was her mummy. I felt I could of been anybody. This was a bleak, black time for our family.

One day in July 2008 I rang the Health Visitors. I had had enough. There had to be something or somewhere that could help Ruby or help me or what was the point of it all? They didn’t know where to refer us to but promised to ring me back. A few days later they did. They had found an out of area special school that ran a school for parents class for families like ours. The only problem was it was end of the school year so we would have to wait until September to visit the school. At last we had a glimmer of hope.