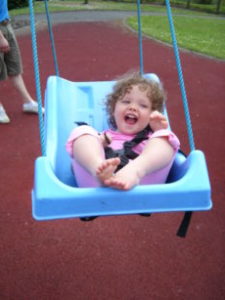 Ruby was born on 8th July 2007. She was a healthy weight of 8lb 11oz. Initially everything appeared to be fine with no significant problems. Ruby was our second child. The first thing we noticed about Ruby was she never really smiled. At about 6 months of age we noticed that Ruby was not reaching certain milestones. We just put this down to her being a late starter. Ruby then began making “odd movements” where she would drop her head and raise her arms. This repeated movement would go on for up to 60 minutes, and at its worst occurring 30+ times a day. We recorded this movement and took the film to show the GP. From there we were referred to Macclesfield District General Hospital to see the Paediatrician. Luckily Ruby started doing the head dropping, arm raising movements whilst the doctor was assessing her. From there we went straight to Pendlebury Childrens Hospital where Ruby under went 4 months of intensive investigations. We now know that the head dropping, arm raising movements where Infantile Spasms- a form of epilepsy. After genetic testing Ruby was diagnosed with a very rare condition called Isodicentric_15 or IDIC 15 syndrome. It means she was born with a partial duplication on chromosome 15. This isn’t inherited, it just happened. It occurs randomly during the formation of cells and there is NO cure for IDIC 15. They say no two children with the condition are exactly alike.

Some of the symptoms Ruby has are: seizures, hypotonia, fine and gross motor delays, cognitive difficulties, sensory and processing disorder, behavioural issues, speech/language delays, and living independently in the future is almost impossible. Ruby has a geneticist, neurologist, cardiologist, ophthalmologist, and a paediatrician.

Ruby’s general development is significantly delayed as a result of her condition. Ruby has cardiac rhabdomyomas (benign heart tumours). She frequently has seizures. It is unknown how her future development will be affected. Ruby likes to play with both her brothers. She and her family use sensory play equipment as much as possible in order to enhance her development. Above all, Ruby is a happy little girl with an infectious smile and is full of cuddles!

September 2010: Ruby started at special school after successfully going through the statementing process.

May 2011: Ruby is nearly 4 years old now. She has settled well at special school and starts full-time from September. Ruby can sit unaided most of the time, but we still don’t leave her side just in case she topples over. She is becoming more co-ordinated and is pulling herself to standing using a frame. It is a joy to see. Ruby still does not verbally communicate and does not sign as yet. Her big brother is learning sign language to help Ruby sign!! Ruby’s is progressing slowly, but she IS improving in Ruby time.

March 2012: Ruby in her school uniform. She is loving school. Ruby is continuing to progress slowly but her family are thrilled with every little achievement she makes – keep up the good work Ruby!

March 2013: Ruby’s development has improved significantly. (Small in the real world but MASSIVE in our world!). She has started to use PECS to make simple choices like which drink she would like. Ruby enjoys music and instruments, especially the shakers. Her crawling technique, although not conventional really improved after Christmas which was a joy to see. The seizures are still a major negative in our daily life. Ruby seems to develop a tolerance to all drug regimes. We are fortunate to have been chosen to try the ketogenic diet later this month. We will keep you informed. 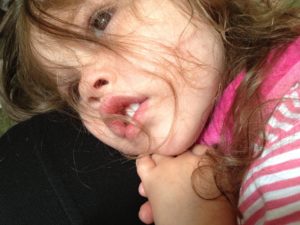 February 2014: Ruby is getting so big now! It is a struggle to lift and carry her so we are more reliant upon hoists and her wheelchair to move her around as sadly her movement has reduced. Unfortunately the ketogenic diet did not work for Ruby and we are still struggling to manage her seizures. At low points this year she was having 50+ seizures a day. On a good day (fewer seizures) Ruby really benefits from the interaction and stimulation offered at her school and from her brothers. It is an absolute joy to see, and hear when she uses her voice to make happy sounds. She still gives the best cuddles and has a smile to brighten anybody’s day.

July 2016: Ruby has had a really difficult couple of years. She’s now has lung disease, is tube fed and needs oxygen and a non invasive ventilator. Her seizures are still a big problem but she is still a beautiful girl with the most heart melting smile.